Will the lights stay on this winter? National Grid warns of a greater risk of blackouts and says electricity supplies will be ‘tight’ this year after undersea cable fire

Britain faces ‘tight’ electricity supplies this winter after a fire disrupted a vital cable bringing energy from France – loading fresh pressure onto a system that is already being stretched to the limit by high demand and limited supply.

The National Grid said the incident at a connector station in Kent last month had cut the amount of energy that can be imported via the 1FA undersea cable – which runs under the English Channel to Calais – by half.

It is not expected to return to full capacity until repairs are completed in March.

European wholesale gas and power prices have rocketed this year due to lower-than-usual gas stocks this summer, reduced supply from Russia, the onset of colder temperatures and infrastructure outages.

High UK wholesale gas prices have helped to lift wholesale power prices as gas plants account for around 40% of electricity generation in Britain.

Britain’s National Grid is responsible for overseeing the country’s energy supply and ensuring supply and demand are evenly balanced. The Electricity System Operator (ESO) is a legally separate business within National Grid.

The ESO said its base case for de-rated margin, which is a measure of the amount of excess capacity expected above peak electricity demand, is currently 3.9 gigawatts (GW) for winter 2021/22, or 6.6 % of capacity, down from 4.8GW, or 8.3% last winter.

“We are confident that there will be enough capacity available to keep Britainâ€™s lights on,” Fintan Slye, executive director of ESO, said in a statement with the Winter Outlook 2021/22 report.

The latest forecast, however, is lower than a winter margin forecast of 4.3 GW made in July this year and also the lowest margin level since the winter of 2016/17. 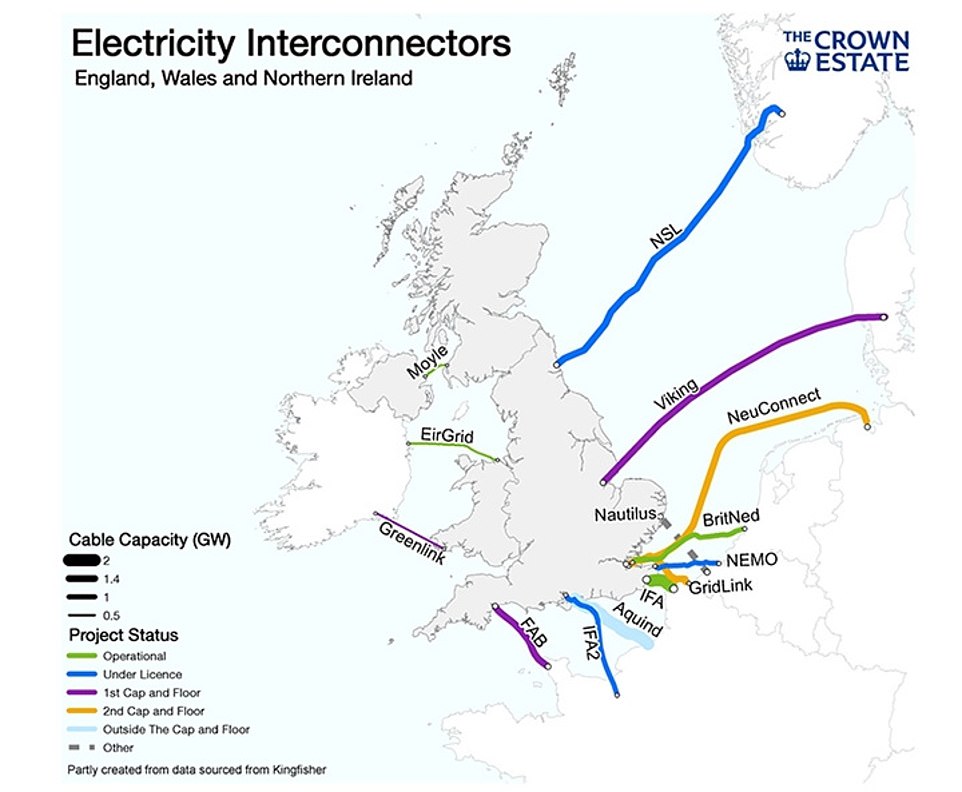 A map showing the various electricity cables that bring in electricity to the UK from the rest of Europe. The IFA link is seen bottom right in green

This graphic shows how electricity is brought in from France via the 1FA link. Converter stations are needed to switch converts direct current to alternating current or the reverse, while the connector links it with the National Grid

Forward power prices in Britain are expected to be higher this winter than last year due to the surge in gas prices.

Any days of tight margins could see significant price spikes and would increase the cost of balancing the electricity system, the report said.

Since the ESO’s July forecast, a fire at the United Kingdom side of the France-Britain IFA1 electricity interconnector has cut available capacity through the link by half, or 1 GW, until March next year.

The other 1 GW capacity of the IFA1 link is currently offline due to planned maintenance and is scheduled to be back online by Oct. 23, with the returning capacity factored into National Grid’s forecasts.

At times of tight demand ESO sometimes issues electricity margin notices (EMNs) signalling to the market it would like more capacity to be made available.

“Margin notices are used as a normal operational tool to highlight when margins are looking tight ahead of real-time â€“ they donâ€™t indicate that demand will not be met,” the report said.

The ESO said it expects to issue a similar number of EMNs this winter as last year, when six were issued. In each instance last winter, the market reacted and the EMNs were later cancelled.